When I was 19, I packed up myself, my peanut and soy allergies, and five EpiPen® auto-injectors, and moved to Finland. This was a goal I had set for myself when I was 12 and I barely slept from the day I received my university acceptance in January until I left in July. After 21 hours of travel, I ventured to the grocery store to find something – anything – to eat. My excitement was quickly squashed when I noticed the vague “may contain nuts” label present on so many foods. Did they mean peanuts? How was I supposed to eat with this vague labelling? Cookies, chocolates, breads, and even some pasta…and for some reason, things were labelled with “nuts and almonds.” Those are the same thing! Almonds are nuts! Not only was I dealing with reading in two new languages (Finnish and Swedish), but I was also dealing with new labelling laws in two new languages…and one wrong choice could have had drastic consequences. While I’m sure Finnish hospitals are wonderful, I didn’t particularly want to see the inside of one of them. 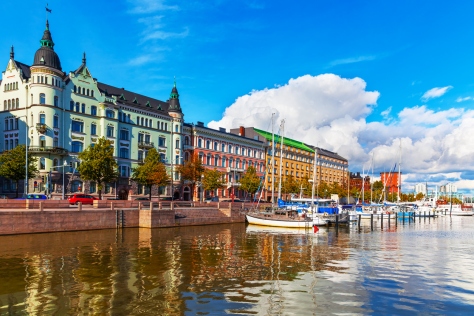 I lost 10 lbs in the first month, and anyone who knows me will tell you I didn’t have 10 lbs to lose. I quickly realized I needed to figure out these laws or let my allergies win and pack my bags to go back to Canada. I started contacting companies asking them to define what
nuts are included in their “may contain nuts” statement so I could better assess the risk for my allergies. Every company responded to me right away, and knew exactly what nuts were present in the facilities where their food was produced. Even a simple Facebook© message resulted in a straight-to-the-point answer where I clearly understood if the product was safe or not. With these quick responses, I soon started to question if I was better off in Finland than Canada.

From there, I explored restaurants. My Finnish friend insisted this bakery she loved would be allergen-safe. Bakeries are an automatic ‘no’ for me while I’m at home and I could feel my anxiety rising as I prepared myself to order a coffee with no cinnamon bun, as usual (perspective: that’s basically like ordering a poutine with no cheese in Canada). I nearly cried when, without missing a beat, the woman working behind the counter knew that the cocoa used in that cake *points to chocolate cake in the corner* had a “may contain nuts” warning on it, but that every other ingredient was safe and every piece of equipment was sanitized between making products. Yes, those traditional Christmas joulutorttu – puff pastries with prune jam, things I had eyed in the stores and accepted I would never get to try – were deemed safe. 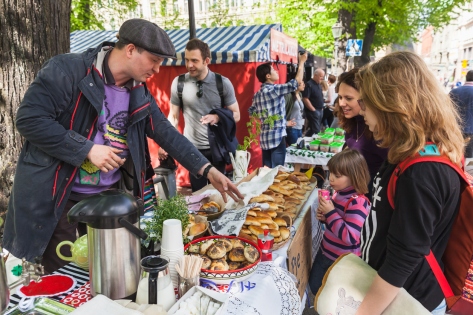 The quality of service was not isolated to this small bakery. Every time I ate out I felt 100% safe and understood. All restaurants knew exactly what was in their food and what their food had come into contact with, whether it was a burger joint on the highway or a fancy restaurant in downtown Helsinki. The school cafeterias labelled allergens in all meals on large screens. Cafeteria food was labelled “contains a small amount of X” (aka, likely safe for intolerances) or “contains no X” (aka, likely safe for serious allergies). The cafeteria workers were incredibly precise with ensuring utensils only touched the food they were supposed to touch and that nothing dripped from one area to another. I skipped the days when peanut dishes were offered, but regularly ate the other cafeteria foods without any issues – and, most importantly, I felt safe whenever I chose to eat.

Originally, I wanted to write about the difficulties of food labelling abroad. Of course, I ran into issues in Estonia when I didn’t bother to learn any Estonian before my travels. I ran into problems in the arctic when a chef told me to just read the menu to see what was in the food (he thought I meant an intolerance). I also assumed that food in Denmark would be labelled in Swedish because food in Sweden was labeled in Danish. I quickly found myself buying a soda pop instead of a real meal to get me through my flight without a reaction because I couldn’t read any of the food ingredients. But through writing this blog post, I have come to realize that, for the most part, food allergies were incredibly well handled in Finland. Of course, you need to know the native words for your allergen. For example, I knew maapähkinä is peanut and soijaproteiini is soy protein before I even applied to move to Finland, and I knew how to pronounce them the best I could. Had I not learned those words, I would have had a significantly different experience. But other than the language barrier, no significant issues occurred. Travelling with allergies is possible, and sometimes you’ll be pleasantly surprised with what you find!

This blog is written and maintained by members of Food Allergy Canada's Adults with Allergies Panel, a group of allergic adults from across Canada. It is meant to share the stories and perspectives of adults with severe allergies. Its contents do not reflect the ideals or opinions of Food Allergy Canada. The information is not intended to provide medical or legal advice. Readers should consult with a physician about concerns and questions which are specific to their own situations.

To read about our blog's contributors, click on the "About" tab in the menu.